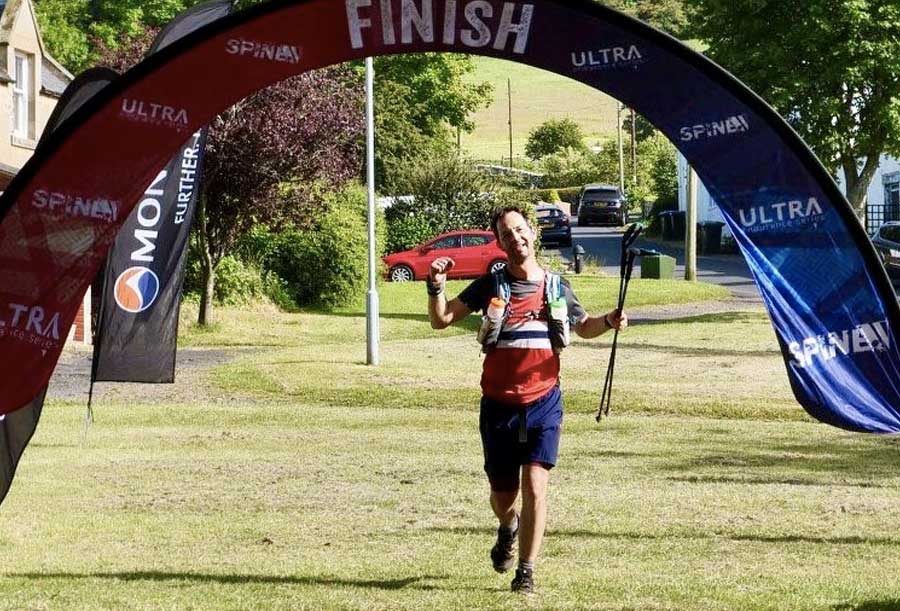 When I embraced the wall of the Border Hotel, Kirk Yetholm on that balmy Friday afternoon, the toughest thing I’d ever done was over. I’d been moving steadily, and increasingly slowly up from Edale in Derbyshire towards this lovely village in the Scottish Borders over the last 6 days, covering 268 miles as I followed the Pennine Way northwards. In total, I’d managed 8 hours of sleep. 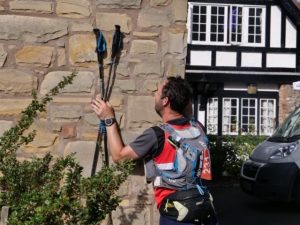 My family were there as I shuffled down that last hill. I could hear Rosie, my eight year daughter shouting “Daaaaaddddddeeeeeeee” as I emerged from around the corner towards the finish. I could see Florence (my five year old) jumping on the spot and of course my wife Alison who had sacrificed most in terms of time, effort and frayed nerves. Some tears crept out as I saw the wall approach and more came as I felt those sandy blocks with my outstretched hands. The Spine Race crew was there, filming, clapping, and beckoning me on. It was satisfying, a massive relief and most of all, immensely tiring.

I was a day later than I had hoped to be. Being a runner, I set a goal, and the goal was between five and six days. I was a few hours into day seven, well ahead of the cut offs but slower that I’d planned. I didn’t care though because the goals had changed four days ago. Four days ago, this stopped being a race and instead became a test of attrition.

This happened because I was fast learning that multi-day ultra running is not simply long distance fell running. Things happen to your body that don’t happen during 24-hour mountain rounds or 2 day mountain marathons which formed the basis of my experience to date. In particular, your feet swell a great deal after 100 miles or so. For all my experience of such exploits, I was new to something as big as this. The Bob Graham, which I’ve done in summer and winter, is 66 miles. The Fellsman, another one I’ve done twice, is 61 miles. The Hardmoors 60 is 63 miles. Plenty of big tests but nothing like this. I just didn’t know now much my feet were going swell once the mileage got into three figures and this race spends 168 miles in three figures.

I packed my ‘loosest fitting shoes’ that ‘never gave me blisters’. This was not going to cut it. During kit check at the start, everyone else had 2 or 3 pairs of shoes in their drop bags spanning 2 or 3 sizes. I had my trusty size tens. When I realised my error at the start when chatting to the experienced hands, I feared the worse and was right to do so. 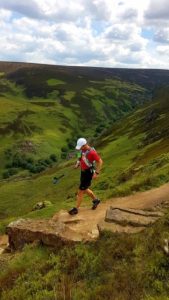 I started in good spirits though and worked hard on the Positive Mental Attitude (PMA). At CP1 (Hebden, 48 miles in) I was in the top third and feeling great. Sure enough though, after 70 miles my feet were throbbing as I trotted into Gargrave and after 109 miles, my feet were in agony. Not through blisters, but due to the pressure. At CP2 (Hardraw) my feet were in bits and I could barely move. The medics did what they could to pad out the worst parts and I loosened everything. At CP3 (145 miles) it was unbearable and we tried taping in bits of old insole to reduce the impact pressure and cut holes in my shoes to create some space. At CP4 (183 miles) after another day of agony and more and more blisters, the holes were made bigger and the tape was more extensively applied. At CP5 (225 miles) it was a case of eight hours rest and elevating the feet whilst the rest of the field trotted on by before a final push to Yetholm.  After that, it was all about hanging on, navigating and eating well and necking painkillers

This simple mistake moved it from a race to a battle to beat the pain and make it to the end. The medics, who were so inventive regarding foot care and plans, were just as keen for me to finish. To them, I’d become a mission and I accepted this status willingly. Without them, I’d have failed.

All this time saw a drop in pace from a healthy 5mph to a drag of 2mph. This meant that this became of a test not just of pain management and stubbornness, but of pride. I knew fellow runners would be watching. I feared they’d be turning their noses up at the slow pace. I knew most of them wouldn’t be, but when you are low, these thoughts come. Deep down though, you know that even the fasties are rooting for you.

I also had to sacrifice sleep because I was out for longer, grabbing the odd 1,2 or 3 hour slot when I wasn’t moving slowly, eating or getting my feet looked at. I planned on about 20 hours sleep in this event and got just 8. 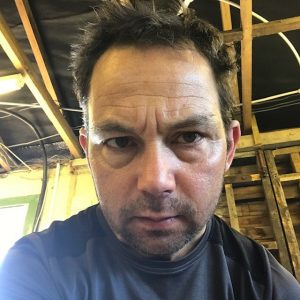 I also had to change the plan, make calculations about ETA, food stops, what food to carry, utilise shops that I passed and also figure out when to eat based upon a much slower pace.

As I ran and shuffled, I was thinking about how this compared to other stuff I’d done. It occurred to me that fell running, my sport of choice, tests fitness and navigation.  Ultras like this seemed to be a fuller test, working every single part of my personality as well as my hill skills. I was often scared; moving slowly over Cross Fell in bad weather as darkness approached was a real test, especially when I happened upon a French competitor who was lost and attached himself to my tail. I wanted to get the hell off that dangerous hill. He was keen to confirm his specific location with his GPS without knowing which actual mountain he was on! I told him that I had recccied this section (all of them actually) and knew the way so just follow, but he fannied about and really got me wound up. But you never leave a soul on the hill – it felt like another test and in fact, I wondered whether I was imagining it?

I had reason to ask myself this. I’d been hallucinating since mile 130 at Lunedale. It’s not scary because you know what’s happening, but animal faces appear in the rocks and words form in the grass and branches. Even indoors, in the shower at Alston (CP4, 183 miles), the mottled tiles seemed to have words and messages in them, including a rather fruity “bollocks” in a brown and green tile, which made me laugh out loud. It doesn’t stop you making navigation or food decisions, it’s just something you deal with rationally. Like, ah look, there’s Lee Majors stood by the River Tees…that square jaw was unmistakable.  The bloke I was with at the time couldn’t believe it, although he was seeing non-existent rabbits…

So yes, I suffered. The weather was hot, then wet and stormy, before being hot again. The mountains were either baking hot and exposed or in the jaws of a driving wind and rain – these are British mountains and it’s what you have to expect. But I must say, despite not racing as I’d hoped and suffering more than I would have liked, it was a magnificent trip.

I learned SO much about ultras, about multi-day events and about kit (very pleased that I can now legitimately buy more kit). A cliche I know, but I learned a lot about myself and my own ability. I rather hoped I’d surprise myself about how fast I would be, but instead turned the abject disappointment of my failure on this event 2 years ago at 90 miles into a sure-fire confidence that I can be tough when it counts. I’ve spent 2 years not being sure if this were true.  I also confirmed that I’m not very fast, but I’ll take that. 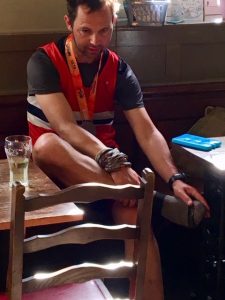 When I bailed 2 years ago with my knackered foot, the reality is that I was relieved. I hated that and it ate me up. I was relieved because the sheer size of this event was terrifying when close up. That 64 miles from CP1 to CP2 was so daunting for me with 48 miles already in the legs. I was determined to break through this but it is such a long long way. This time, I was probably slightly less fit, with sore feet but with more resolve and no excuses. I’ve watched people fight, fail, fight again and win of late and knew that was the score here (here’s looking at you JJ). I think this huge trip on bad feet has basically pushed that fear bar very very high indeed for me – mentally I just got a lot stronger and I’m thrilled with that.

It was also quite a lonely trip, especially as I dropped backwards through the field, but there were some quite remarkable people in the race with me and around and about more generally. A mad Polish bloke appeared out of nowhere and walked up Penyghent with me as he had been watching the race and became totally absorbed by it. He apparently spent the next few days following the race in his van and providing informal support. People in villages would pop out and give me food, drinks and encouragement. In the middle of the night on Hadrian’s Wall, a guy appeared from nowhere with a flask of tea having tracked the runners through. The whole race seemed to capture those around it, which felt nice and was uplifting in some dark times. 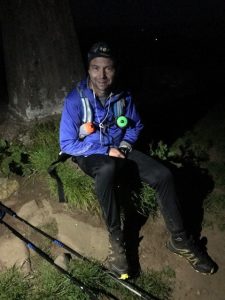 Uplifting also was the dot watching. Having been a dot for six days, I was surprised by how many people followed it. Let’s face it; watching ‘231’ move very slowly up a screen (or not move at all) is hardly riveting. Maybe the fellrunners and my family would be following it? Upon finishing, it was clear that runners of all persuasions were at it, work colleagues who were vaguely aware of what I was doing became increasingly gripped and friends from different parts of my past were joining the crew of dot watching maniacs. It sends a warm feeling through you when everything hurts and you’re berating your own performance to find that people watching your dot offer you some much needed perspective, which is essentially to say, bloody hell, well done for running 268 miles.

So now what? I’m left feeling like I want to take the learning and add it to the confidence that I gained form this monster event to put in a much more assured performance somewhere else. That’s for another time. My main feeling now is that I’m profoundly grateful that I managed to finish. It’s not a very British thing to say, but I’m mega-proud of how I got through this, despite it not looking so hot on paper. Pride wise, this ranks above my midwinter Bob Graham.

I won’t likely do the summer Spine again. It’s done now; a 32-year-old ambition to do the Pennine Way is defeated. For now, I shall wait for my now size-13 feet to return to a size 10 and enjoy running when I can get back to it. I might amble round the parkrun on Saturday and take it from there. But no more big challenges for a while, until something else tickles my fancy. In the meantime, I will try and get some speed back in my legs (which weirdly, don’t hurt at all).

I couldn’t finish without thanking my wife Alison. She’s the reason this stuff is possible and that I get to dream stuff up and go ahead and do it. I reckon I’ve fallen on my feet there, no matter how blistered and swollen they happen to be. 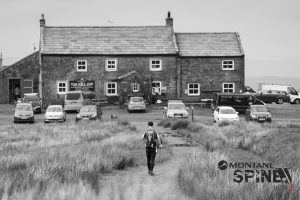 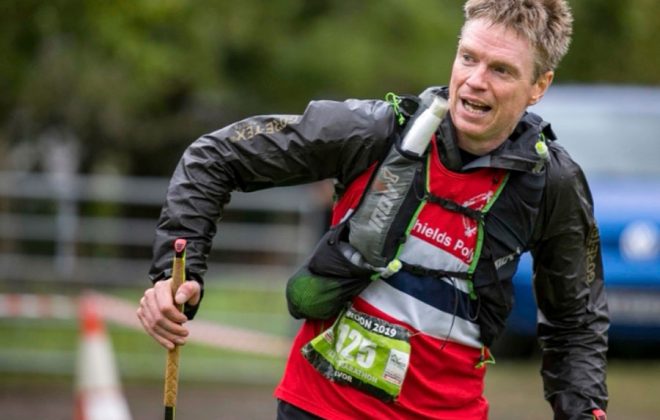 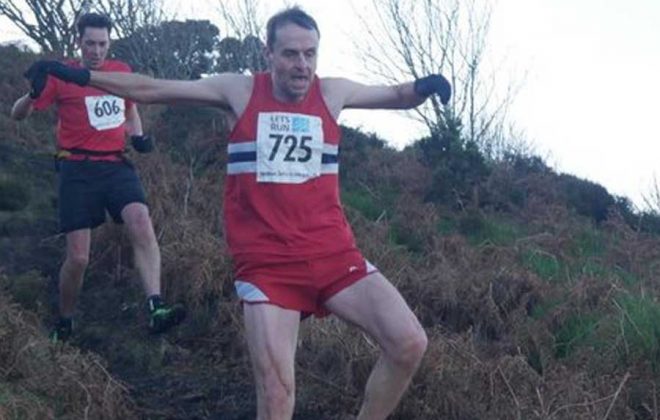