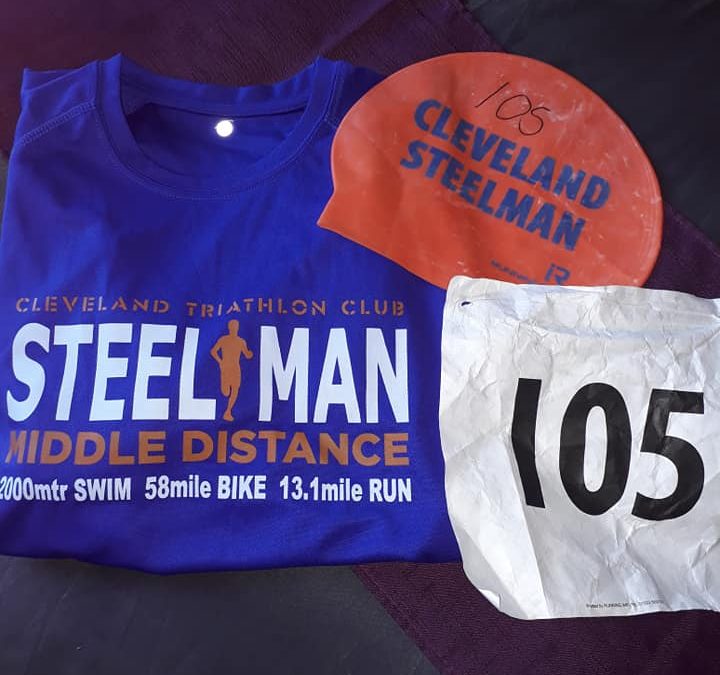 I registered for this ages ago as it usually sells out fast, so I really wanted to do it this year and made it my A race. No full distance this year, but an aim to get faster over shorter distances. That hasn’t worked – of 5 GP qualifying event entries this was only the 2nd (and final) one I’ve made the start line of.
I knew I hadn’t put the work in and at about half way on the bike I knew it was showing pretty badly already.

So, in conclusion – whilst I had a smashing day out with Paul Robertson, the moral of this story is that I didn’t give this race, or the half iron distance, any respect at all. And it showed. And I got what I deserved, which was a shoddy performance and a world of suffering. More on that later.

After a few days of rain in the week leading up to this race, the weather gods decided to return to normal. It was a scorcher. On a bright and windless morning Paul picked me up and off we set.

All the Cleveland Tri club events seem to be well organised and low cost, with no expensive bling or razzmatazz, they do what they say on the tin, based at the lovely Ellerton Water Park, between Catterick and Richmond.

On arrival we found that many people had camped overnight so I had a large dollop of ‘Van envy’ at the VW vans (having sold mine last year) and an even larger dollop of jealousy at those cooking up sausages and bacon for their pre-race breakfast of champions. Suddenly my overnight oats and a bit of soreen (other malt loaves are available) wasn’t hitting the spot. But Paul, pro that he is, seemed quite happy on bananas. Some people make you sick.

Registration was a breeze for me, but Paul took ages. I’m sure I saw him being led into a room by a burly man in a pair of marigolds, and out again with a surprised and pained expression, but he didn’t want to talk about it.

We got our ankle timing chips, a nice blue hat, and race number (only one – so clearly assuming everyone uses a race belt) and one for the bike. We also got our finishers t-shirts, cue a semi-serious conversation about a different type of day out involving putting lots of empty calories in but using up very few. But we’re strong-of-will us middle and long distance types. And anyway, we bumped into Cheryl and Craig so we’d been spotted! And of, I’ve wasted a stack of entry money this year already haven’t I? 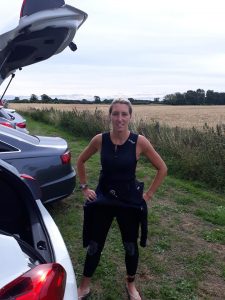 So, into transition – plenty of racking but all the bikes quite tightly packed. Next to me had racked the wrong way round, so when the marshall asked me to re-rack instead of him we entered into a bit of a pantomime with me as the hero (obvs) and he the villain. The hero always wins, and on my return to transition later the adjacent bike had be re-racked correctly. That was to be my only victory of the day.

The briefing included a minute’s applause in memory of John, the owner of Ellerton, who sadly passed away a couple of weeks ago, and in sympathy with his family, and gratitude to them for allowing the event to go ahead at such a difficult time for them.

Paul also cracked what was, for him, at the time, a hoot of a joke. Clearly not actually that funny though, as I’ve forgotten it. Good job he’s a good athlete.

Into the lake – water circa 21c, so wetsuits optional. Didn’t see anyone going in without. Difficult entry and exit, with rocky stuff underfoot and no matting, but the water quality is exceptional here so it’s not all bad.

Mass start, anti-clockwise swim, 2 laps. The bouys are very spaced out so there was a lot of zig zagging, but at 42 mins I was satisfied if not overjoyed.

Into T1, quick (for me) at about 3 mins, and out with the bike to the mount line. A lot of the local roads, including the starting road, have been recently resurfaced with tar and chippings – lots of sharp stuff and lots of it loose, so I’d already decided now wasn’t the time to try my first ever flying start.
First lap was fine – still no wind, although some of the road surfaces are wrist-shatteringly, teeth chatteringly, bike breakingly bad. Wouldn’t fancy solid carbon wheels on here. It undulates all the way too – no big hills, but it’s never flat.

Lap 2 was tougher – wind got up and I lost my legs badly somewhere around mile 40. People I’d left well behind started overtaking me. I’m convinced Supergran came past.
Then an opportunity for a breather – I stopped to help a fella who had used his only spare tube and gas already and was now struggling on puncture number 2. I haven’t so much as touched my spares since IMUK last year (extra tubes still taped to my saddle bag) so I knew had plenty – I chucked him a tube and a gas, and set off again, smiling at my good deed as people continued to pass me. I should’ve asked for a fair swap though – his legs for my spares! My smile disappeared completely in the last 100 metres of the bike as he overtook me as I slowed for the dismount, skipped of the bike and into T2, without so much as a sideways glance, and that was the last I saw of him. Grrrr!

Out of T2 and an immediate stop at the feed station for water. I’d gone through 2 bottles on the bike already and just felt bone dry. Wet sponge over the head and I was off, desperately trying to get the legs moving into a steady rhythm. By 2 miles in I was in trouble. Nothing in the legs, no shade, thirsty and grit down my socks tearing my heels to shreds. The first couple of miles is along a loose stony trail, leading into a narrow roadside path, eventually onto the road itself, before turning onto a better track through the trees and some much needed shade (past the other feed station and a legend giving cold showers from a hose pipe, at about 3 miles – Paul passed me on his second lap just before here – looking strong) and then into a field by the river, up through the gate and back on the narrow path back to the stony trail (anyone who has done Short Course will know these bits) , a loop through the quarry and the caravan site and back to the start /finish for lap 2.

Thoughts of spending the next 24 hours eating and drinking kept me going at a walk-jog (that is to say, I walked a lot on lap 2, occasionally stumbling into a lopsided shuffle when the shame became too much). At about mile 11 I walked with another guy in equally shit state and we talked about all manner of nonsense as we passed marshals who pointed out that ‘it’s not a Sunday stroll’. I couldn’t have cared less.

Anyway, crossed the line and didn’t even bother getting my results printout. I was so dehydrated that after I’d ‘cooled off’ in the lake, I didn’t wee again for about another 4 hours.

Paul, bless him, could have run another half marathon and more whilst waiting for me. He looked pleased to see me, and I’m guessing it wasn’t just because of my magnetic personality and wit, as we got home in record time.

Craig Hall posted a good time on his dodgy knees – comfortably sub 6 hours, and Cheryl came in a few seconds after me. Team Poly back safe and sound.

So – a nice day out with a nice chauffeur, on a decent course at a cheap and well run event with a lovely swim. If you want to do a half but are on a budget and don’t care about the hype, definitely recommended, although in this heat we could have done with another feed station per lap.

But I also recommend taking it seriously, training and preparing properly. I’ve over-eaten and under-trained for over a year now, so if I’m going to do myself justice at Outlaw Full in 2019 I need to get real and get started now. There, I’ve said it. Feel free to keep reminding so I don’t slack off over the next 11 months. 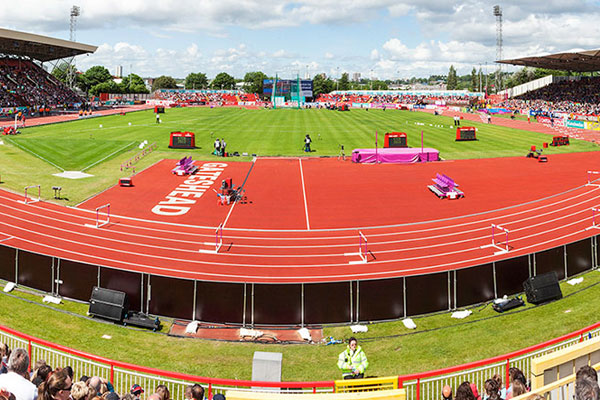 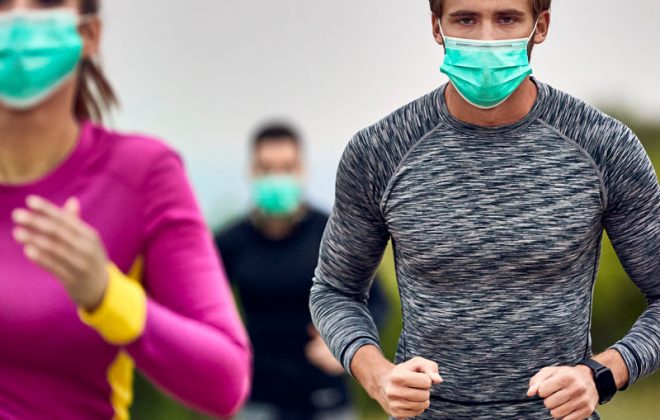 An Athletics Club at the time of Covid-19 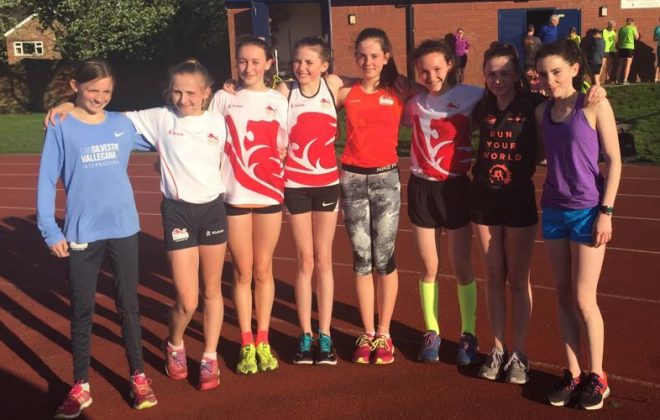